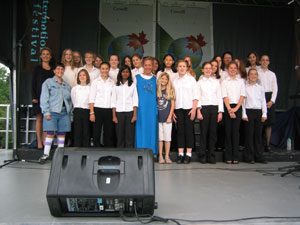 As you all know, 2013 is the 10th anniversary of the Cantiamo Girls Choir of Ottawa. For those of you who are new and do not know the history, here is a brief summary.

In June, 2003, I resigned from my previous choir and intended to take a year off after having conducted choirs for nearly 20 years. In August 2003, composer James Wright contacted me looking for a choir to sing his piece If I Were the Moon (text by Canadian author Sherri Fitch who was keynote speaker) at the Ottawa Writer’s Festival. I told Dr. Wright that I did not have a choir at the time, so he suggested we each call some choristers that we knew and have them get together for a couple of rehearsals to sing this piece and two pieces from Dr. Wright’s Gallery of Song. We each called some girls and ended up with a group of 21 choristers who were excited to be part of this event.

We had a successful rehearsal and a very successful performance! Much to my surprise, when I arrived home later that day, there was an invitation on my answering machine from the Ottawa Citizen for us to sing at their Raise a Reader breakfast at 6:00am in the morning at City Hall. I put this request out to the group and once again, these choristers enthusiastically accepted this invitation! Directly after this, came an invitation for us to sing at the Congress Centre for the National Volunteer Awards. It was at this point that a decision had to be made as to whether I would take my “year off” or whether this choir was “meant to be”. It was impossible to resist the enthusiasm of the choristers, the invitations from the community, and the requests from the parents, and thus, Cantiamo was born! In the 2012 – 2013 season we celebrate our 10th anniversary!

Now we are well into our anniversary year and Cantiamo is busy preparing for our special 10th year celebrations.

The 10th Anniversary Concert will take place on Saturday, June 8th in beautiful Dominion-Chalmers United Church. We are also looking forward to singing once again with our Cantiamo alumni who will be invited to sing some pieces with the current choir in our anniversary concert. We will look forward to singing chorister favourites from the past 10 years as well as premiering a new work by composer James Wright and another by Jussi Chydenius, one of our friends from Rajaton! Another good friend of Cantiamo, Kathy Armstrong will lead us drumming and dancing in Gahu and the Cantiamo Training Choir will make a cameo appearance too!

Plans are in the works to create a double CD which will include recordings from past years of Cantiamo as well as a live recording of the Gala 10th Anniversary concert. We now also have a commemorative 10th Anniversary pin that will go to all alumni, past and future. Presentation of this pin, at the door of our concerts, will allow alumni a discounted ticket price when attending Cantiamo concerts. Once a Cantaimo girl – always a Cantiamo girl!

Having been accepted to Festival 500, plans are well underway for the Cantiamo trip to Newfoundland from July 3 to 11. Check out http://www.Festival500.com for more details. Participating in this festival in our 2004 – 2005 season was the first big event taken on by the original choir and we want to celebrate by feeling the thrill of being a part of this fantastic experience in Newfoundland once again!

It is definitely something to celebrate that the Cantiamo Girls Choir of Ottawa has been going strong for 10 years! We have continued to learn and grow and share ourselves with our community. In turn, we have been well received and generously supported, appreciated and encouraged. We look forward to many more years of Music, Leadership and Outreach with the Cantiamo Girls Choir of Ottawa! Happy 10th Anniversary!

The excitement of organizing scores for Cantiamo's 20th anniversary concert! Celebrate with us on June 3, 2023, at Carleton Dominion Chalmers Centre!
Did you know that Cantiamo has a #GoFundme page? Please share widely! As we gear up for #GivingTuesday and beyond, please consider supporting Cantiamo Choirs of Ottawa! Money raised will help return us to health after a difficult couple of years and will help us support our 20th anniversary concert in June 2023. For more information visit https:gofundme.com/f/help-cantiamo-choirs-celebrate-their-20th-season?qid=8082das53615e2a984ed7f297fef7ec5
Cantiamo Girls Choir engages body, brain and being as they prepare to sing!
Cantiamo Womens Choir spreads out to mix harmonies and textures in Laura Hawley's fabulous arrangement of "Chelsea Morning!"
Cantiamo apprentice Girls Choir puts the pieces together in a piece with lots of time changes!
Apprentice Girls Choir shares Jackie Hawley's colour coded score to "navigate" the music.
Cantiamo Girls Choir reviews minor scales....so many scales to sing!!!
Relaxed body and breath at the Cantiamo Girls Choir rehearsal!