On May 5th, nearly five hundred choristers packed into the NAC foyer. Every one of them loved to sing, and knew they were there to promote music education. When Jackie Hawley raised her arms, all eyes were focused on her. The singers were silent, until she brought them into song. These choristers were proud to represent their school and their community, and above all, proud to sing.

Music Monday is a nation-wide celebration that promotes music education in our schools. On the first Monday in May, schools and choirs gather in great numbers to join their voices together. The Cantiamo Girls Choir and Training Choir participate in this event every year as leaders and mentors for the school choirs. It was amazing to see the younger singers learn by watching and listening to themselves as they sing with us. We were united by song. 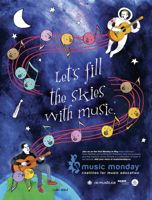 The repertoire for Music Monday consisted of bilingual songs with uplifting messages. The first song that was performed by the massed choir was “Sing Out,” by David Julian Michaels. It is a vigorous and attention-grabbing piece that is loved especially by younger choristers for the snazzy clapping in the middle. The next song was called “To Young Canadians” by Ottawa-composer James Wright. The lyrics are based on a letter written by Jack Layton just before his death. The final song was written by Col. Chris Hadfield and Ed Robertson of the Barenaked Ladies. It’s called “I.S.S. – Is Somebody Singing,” because Chris Hadfield was inspired by his 2012 mission to space.

This year was my eighth time participating in Music Monday. It was a bit different for me, because this was the first year that I have been older than the school choristers. I discovered that it’s still the same powerful feeling, no matter what age I am. It is always moving to hear the future generation singing Jack Layton’s words “Let us be loving, hopeful and optimistic and we’ll change the world.” 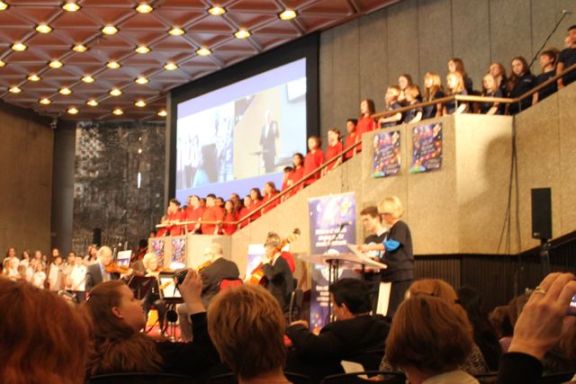 Thanks to all for supporting our fundraiser! Safety, music and fun at our contact-less pickup!
Training Choir guest artist Pete Leckie showed us that playing the bagpipes involves breath flow, and creates harmony...just like singing! We experimented with making our voices have the same colour as the pipes:)
Training Choir had a virtual meet with Deanna Edwards, of The Sonic Timelapse Project. We are singing her beautiful composition, "One Place For Now," inspired by thoughts and emotions during the pandemic.
Choristers in Primary Choir conduct 6/8 time, in the "Teddy Bears' Picnic!"
Happy Valentine's Day, from our Cantiamo family to you and yours!
"Hearts and flowers" become "hearts and maracas" during our Primary Choir rehearsal. Happy Valentine's Day from the Primary Choir!
Training Choir conductor Leslie Bricker uses visuals showing 3 part harmony in the classic, "Fish and Chips,"
Cantiamo supports Sonic Time-lapse, a project that commissions new choral works during the pandemic. Composer Deanna Edwards wrote "One Place For Now;" can't wait to sing it!
Cantiamo Primary Choir members have fun creating beautiful mouth shapes!